Goetia Work in the Context of Chaos Craft

Having just convened for the second time after the lockdown with our coven we performed a conjuration of Astaroth – the third time that I have done goetic work in a group and we considered it to be a great success. Without revealing my exact method (I would like people to come along and experience my method for themselves!) we managed to each of us ask Astaroth a question and get a fitting answer. All of us were very happy with what we had achieved! Participants left feeling inspired and empowered.

Being a chaos magician I will freely construct my rituals in a creative way to hopefully achieve the desired result without worrying unduly about violating principles of tradition. I used strobe lights with the lenses painted over with colours and out of step with each other to induce an altered state of consciousness. I tested this at home with my friend in the kitchen one evening: they got scared and kicked me in the shin on the way to the light-switch accusing me afterwards of ‘pulling faces’! This told me that I got the desired result!

I tend to think that the entities in the grimoires are not inherently evil but am more inclined to think that we have a list of spirits here, many of them gods of ‘other’ religions, re-branded as ‘demons’ for which we have instructions for performing pujas in order for them to assist us in our lives. Many purists will think of me as being dangerously complacent! However, I have worked extensively with Astaroth within groups and by myself using various methods and have come to no harm by having this perspective. For me the word ‘evil’ is in itself dated and of little relevance in modern language, a word usually reserved for things we fear or don’t like.

Here we reach a point of clashing of paradigms and theories on how this kind of magic works and for that matter any type of magic. The psychological model based on Jung’s theories is a favourite for many. Ideas about the Shadow and archetypes with Jung believing that thoughts do not altogether take place inside the brain. Crowley himself was a veteran of this perspective when he introduced his Goetia publication by asserting that the spirits are actually parts of the brain. ‘Psychologizing’ magic has a history of at least 100 years. There is no doubt in my mind after reading Jung’s Red Book that Jung himself was a Hermetic magician since Philemon, Jung’s Daimon actually carried a copy of the 6th and 7th Book of Moses with him, which is a grimoire! He believed that thoughts have an external reality of their own, that would literally mean that ‘complexes’ can be equated with spirits by his way of thinking. How thoughts can be ‘external’ has not been clearly explained to my satisfaction, hence I am not fully subscribed to this theory or any other paradigm for that matter.

Whichever way you believe magic works: there is no complete theory which explains it flawlessly. Jung was a scientist and his theory on the paranormal is elegant and serves as a good springboard for magic until the moment when you dive in and actually do the work! Once the circle is drawn: all that stuff falls aside for a while and you proceed without a rational framework.

Being a chaos magician, I am concerned with results rather than traditions. I don’t think it is necessary to quench my ritual knife in mole’s blood in order to get a good result when following instructions in the True Grimoire but if you are a purist which instructions do you follow and which ones do you ignore? Working as a gardener and I can tell you that I am proud of my Japanese pruning saw as it makes me look like a garden ninja however: even with this tool I would struggle to cut a wand thick enough with one stroke to put all the necessary signs on it as prescribed in the grimoires!

As for the virgin parchment: I recognize a life-force offering when I see one! If you cut the throat of a goat and pronounce the name of the spirit that you wish to conjure that is what I see, a life-force offering. This should be an important part of the ritual but for obvious reasons, it cannot be so. In the African Traditional Religions the use of blood is difficult to overlook. I have seen goats being sacrificed in India. It features in the Bible: Jehovah insists on it and punishes Cain for failing in this. The use of blood in religious and magical traditions is cross-cultural and can be found from South America all the way to Nepal. It is considered effective.

My argument is this: there are no purists in goetia work! You will never catch enough moles to quench that blade in their blood and you must not try to do so either!

Seeing as you are unlikely to be able to follow exactly the instructions as set out in the grimoires: what would be the best way to proceed?

Black and Hyatt in ‘Pacts with the Devil’ give some good ideas on substitutions. For a life-force offering they suggest that the sexual act can be used and the resulting fluids be offered instead of blood. Crowley did so with great effect in the ‘Paris Working’. One’s own blood can also be used to great effect: using sterile diabetic lances, a few drops is enough in my opinion to get impressive results. Drop some in that incense for example! It would not take a creative genius to come up with really good techniques to make a powerful and effective life-force offering without injury to yourself or any other living creature! The ‘Vinum Sabbati’ that Kenneth Grant refers to in the Carfax Monograph I would consider to be the ideal.

Chaos magicians will dissect a ritual and see procedures that are common to many other acts of magic. Altered states of consciousness are useful and everything from incense and various drugs to spinning, over-breathing, sleep deprivation, fasting are used in magic around the world in various cultures and times. My ‘unusual’ approach to conjuration would not be considered at all unusual in this context. I like using a dutch-pot (cauldron) as the place where the spirit manifests: painting the sigil of the entity onto the floor of the pot. I have the charcoal read on there with the incense that has all of the special ingredients that you wish to add. This might be some heady incense and a few drops of blood/Vinum Sabbati that you have hygienically added.

Chris Bennet in Liber 420 argues convincingly that intoxicating drugs were used in spirit communications of many types – asserting that the incense used was actually exactly that. It would be a shame to reduce conjuration work down to a ‘controlled hallucination’ as it is not a complete theory that explains every aspect of the phenomenon, such as the paranormal effects, but it might be considered another way of opening a path to successful work in this area.

I would suggest the following formula for goetia work, like recipes in a cookbook you will not want to slavishly follow my suggestions and you might have strong opinions that will prevent you from doing so: 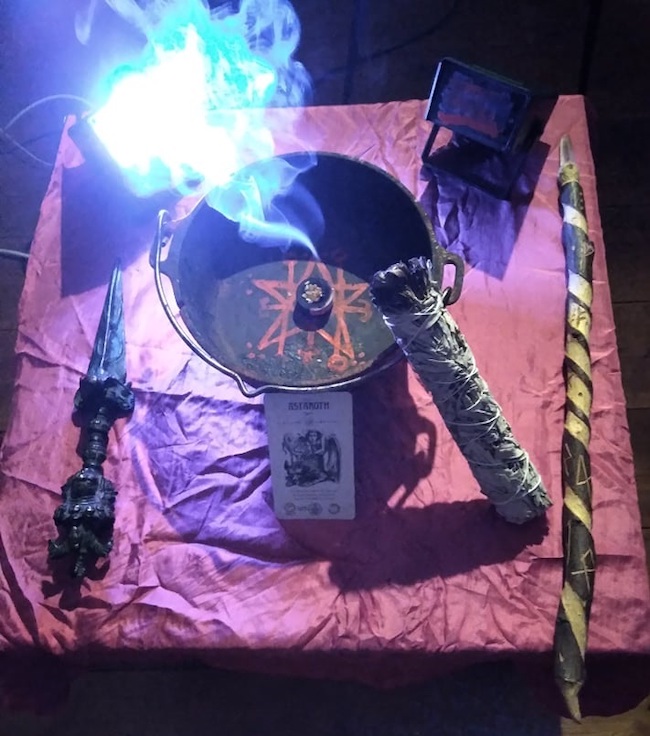 I have directly used over-breathing and strobe-lighting to great effect in group goetia work as well as drumming, using my own blood and other unconventional methods. As a group we have successfully communicated with Astaroth: each member in turn and got satisfactory answers to our questions. I certainly had very vivid visual effects without using intoxicating drugs. There is no need to harm animals and there is no need to skimp on those techniques that help just because they are not in the book or form part of goetia tradition. Magic is a dynamic pursuit which in my opinion should evolve and change with time. Our method also needs honing and improving. I would like to do a great deal more to make our ritual more powerful and effective!