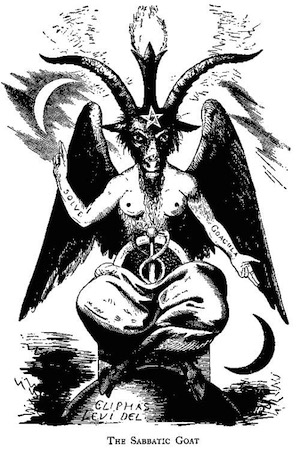 Baphomet is a name of a deity of unknown origin. The name Baphomet traces back to the end of the Crusades, when the medieval order of the Knights Templar was suppressed by King Philip IV of France. On Friday, October 13, 1307, King Philip had many French Templars simultaneously arrested, and then tortured into confessions. The name Baphomet comes up in several of these confessions, in reference to an idol of some type that the Templars were said to have been worshipping. The description of the object changed from confession to confession. Some Templars denied any knowledge of it. Others, under torture, described it as being either a severed head, a cat, or a head with three faces. 'Gargoyles' from Templar churches are shown below (the first from Lanleff, the second and third from St Merri). Did these 'gargoyles inspire Eliphas Levi? Or were these gargoyles actually depictions of Baphomet? Was Levi merely depicting Baphomet as he had been traditionally known? Or is it a 'coincidence'? 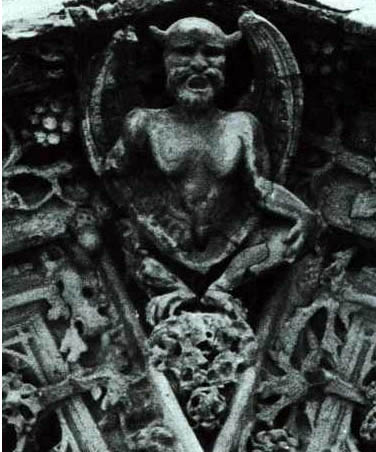 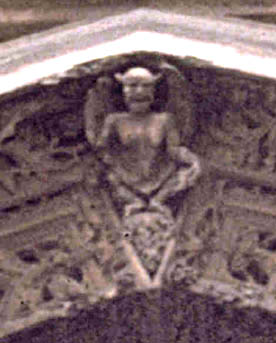 Some modern scholars believe the name was an Old French corruption and misspelling of the name Mahomet (Muhammad). However, it is unlikely that the Knights Templar, having fought with Muslims for many years, were going to worship Mohammed, a prophet, which is something Muslims do not even do. In the 19th Century, Jewish occult author Eliphas Levi drew an image of Baphomet as a 'Sabbatic Goat' deity (seen above), which was later associated with being the Baphomet of the Templars by many. This image was incorporated into the Waite Tarot deck as the Devil card. Aleister Crowley was fascinated by this image of Baphomet, and linked him to the Roman deity Harpocrates, and incorporated him into his Thelema religion.

Some speculation exists as to whether Eliphas Levi was in fact influenced by these gargoyles and his naming the figure Baphomet came only in the 19th century, rather than the concept or name existing at the time of the Templars. This is perhaps more plausible than the other way around.

The Knights Templar were considered by Anton LeVay to have contributed some symbolism and methodology to modern Satanism, but not so much in the way of teachings and theology. Anton LaVey includes reference to the Knights Templar in the introduction to The Satanic Bible. Templarhistory.com features articles on Baphomet and Eliphas Levi. Vexen Crabtree has a short overview of the historical origins of Satanism including Baphomet and the Templars.

We will probably never know exactly what the Knights Templar got up to behind closed doors, and to what extent they embraced other religions or occult or mystical practices. Much is made of the fact that they embraced occult and gnostic philosophies and this is the reason for their persecution. It is known that they did have contact with Cathar communities (the French Gnostic sect), and indeed many Cathars joined the Templars, as they saw them as an alternative source of power to the Catholic Church. It is likely that many Cathar beliefs were integrated in some capacity into those of various Templar groups. However, it is much more likely that the Templars were persecuted and had their assets seized because they had become too powerful and too rich, and were considered a threat by the monarchs and Catholic Church of the time, being somewhat independent as an organisation. They had accumulated vast sums of wealth over many years by acting as guards to protect travelling pilgrims on their way to Jerusalem, which had been recently captured by the Catholic Crusaders from Muslim territory, with acts of genocide on both sides. The Templars were nominally Catholic Christians, but their war-like approach was hardly in keeping with the Bible, in the same way that the spirit of the Crusades was not either. They were essentially protecting/profiteering from Christian tourists visiting annexed land. Over time they build up a network of Castles, in both Europe and also in the Middle East. The Templars were in no way hedonistic occultists, in the way that The Hellfire Club, LaVey Satanists or Crowley's Thelema followers were, and were sworn to a life of celebacy. Only a small percentage of the members of the Knights Templar were actually warrior knights, most having domestic type roles within the castles and domains that they controlled. Rose tinted views of the Templars are clearly not really very realistic and are highly speculative at best.

Albert Pike is quoted in op. cit., p. 734, teaching of the 28th Degree, referring to Baphomet as the Holy Spirit! Some argue that Pike used the modern view of Baphomet as an anti-Christian symbol. About Baphomet he says 'The Gnostics held that it [universal agent] composed the igneous [pertaining to fire] body of the Holy Spirit, and it was adored in the secret rites of the Sabbat or the Temple under the hieroglyphic figure of Baphomet or the hermaphroditic goat of Mendes .' Some modern Luciferians and Satanists consider Pike's definition of Baphomet to represent Satan.

Albert Pike wore a symbol of Baphomet around his neck. 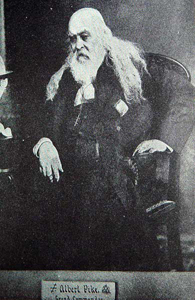 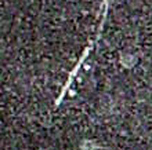 This the same symbol he used next to his name.

This was similar to the symbol used often on his 33rd degree masonic notepaper.

This alleged 33rd degree notepaper symbol was identical to that used by Aleister Crowley as the Thelemic X symbol for Baphomet.

Baphomet is the deity often associated with 'Left-Hand Path' occult movements of the last two centuries.

Set is the Egyptian God, of the desert, storms and Chaos. Set is one of many Gods worshipped by (some of) the ancient Egyptians. Each representing one quality of the whole. This is a concept that has re-appeared in other religions and myths every since, most notably in Neoplatonism and Hermeticism.

The Theistic Satanic church The Temple of Set (ToS), associates the deity Set with Satan, and this use of 'Set' is considered a modern association. The Temple of Set, and Setians in general, consider Set, the Eyptian God, to be the real dark Lord behind the name Satan. Setians use the same symbol of Satanism, that is, the inverted pentagram. ToS is described on Wikipedia here

The ToS was a break-away group from the Church of Satan (CoS), created in 1975 by High Priest Michael Aquino, 'after Anton LaVey had offended many of its [CoS] members by turning The Church of Satan into a tool for his personal expression and financial income.'

One commentator has described it thus: 'The ToS was part of the CoS and broke away - mainly because many wanted to really explore the darkness - and there were those who knew first hand of these primal forces and wanted to call them into action, the CoS was attempting to cultivate a non-spiritual approach and did not want any part of it. Thats when the those who wanted real magic left. The CoS is nothing more than a carnival act and theraputic psychodrama at the most - the ToS are the authentic "satanists".'

In the 1950s Anton LaVey formed a group called the Order of the Trapezoid, which later evolved into the governing body of the Church of Satan. From 1975 (?) onwards, this Order became a sub group of The Temple of Set. The Order of the Trapezoid describes itself as 'A Chivalric Order of Knighthood Dedicated to the Prince of Darkness and the Black Flame.'

Eric Kauschen is the current Grandmaster of the Order of the Trapezoid. The history of the symbolism with the O.Tr. is discussed on the order's web site, including references to Wewelsburg Castle.

Dubious allegations of sympathy with the Nazis and obsession with Nazi occultism are discussed on the Satanism and the Far Right page.

Ba'al, for example, was an God worshipped in ancient Carthage. The Carthaginians' Baal worship is mentioned in the Old Testament - referred to as 'Baal' and 'Baal-zebub'. The name Ba'al has also been associated with a number of other Gods, including the Roman God, Saturn. There is a book of Beleil in the Satanic Bible (atheistic of course!) which links Ba'al to LaVey Satanism. Theistic Satanism, for example, the Church of Azazel (who define Azazel as Satan), believes Belial (i.e. Beliel, Ba'al) to refer to the down-to-earth and practical side of Satan. Diane Vera describes Ba'al on her Theistic Satanism web site. 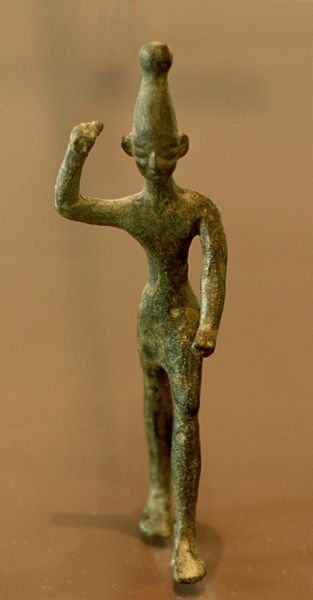 The demon Bael, from Collin de Plancy's Dictionnaire Infernal (1862) is shown below. 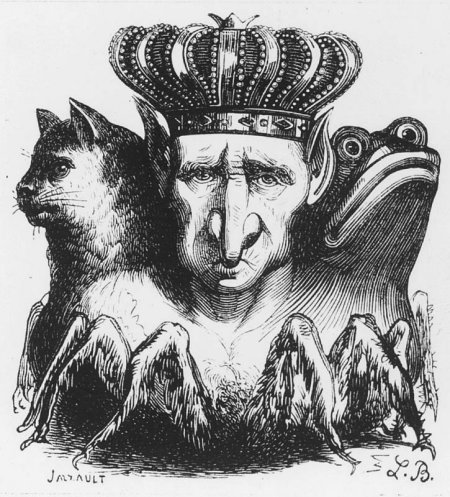 Beelzebub, associated with the Canaanite god Ba'al is depicted in Collin de Plancy's Dictionnaire Infernal (Paris, 1825) is shown below. 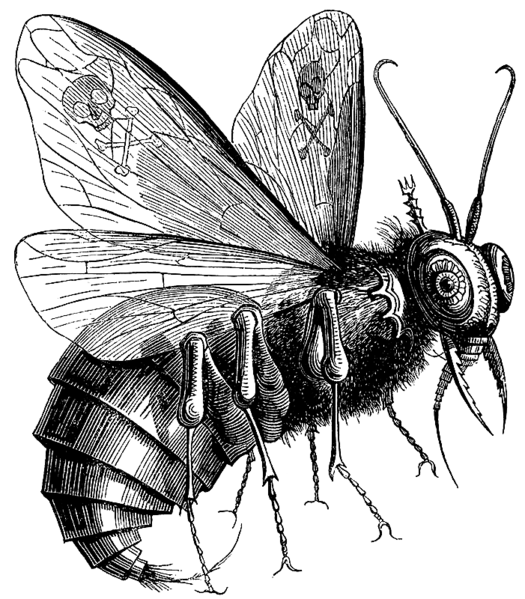