This page is concerned chiefly with animal body language, specifically that of sharks, but some of the principles can be applied to human interaction also. Sharks are a type of fish of course, and come in a variety of species and sizes. This page is concerned with those larger, fish eating varieties. It is also hoped that this page might help to dispell some of the myths and fears about sharks, ironically spread by the movie Jaws, the book written by the environmentalist Peter Benchley, who now regrets ever having written it. 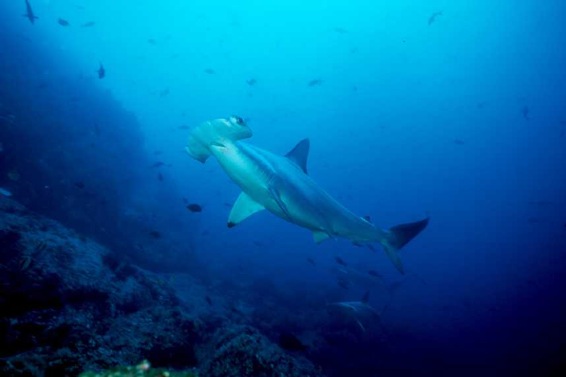 First let us consider some basic facts about sharks.

Below are some tips on dealing with sharks. Bear in mind that sharks do not use speech or language and although they have excellent hearing, and sound can affect their responses and behaviour, sound is not a form of communication between sharks. Depending on what you want from your interaction with a shark, it will govern the nature of your interaction and how you deal with the shark. Some people come across sharks by chance, e.g. swimmers, and usually want to get away from them; many scuba divers want to get as close to them as possible, but within certain comfortable limits.

When it comes to predatory land animals, such as large wild cats or bears, it is often prudent to stay still if they approach, and not back off, and show no fear. They can run MUCH faster than you. Playing dead works sometimes with bears, but othertimes not! If you have no alternative, then try to look fierce and big, and perhaps shout at them at the top of your voice if they get too close. Bears can climb, so it's no use climbing up a tree!

Of course, not all land animals lose interest if you merely stand still. If a crocodile or alligator (of significant size) is approaching you, then it is likely to outpace you, but depending on how close you are to the shore or safety, you may as well make a run for it, as you have nothing to lose. If a crocodile comes in to attack you, then give it everything you've got. Use anything to attack it. Crocodiles and sharks tend to close their eyes when biting, but if not, then poking or stabbing the eyes is of course a point of weakness. With animals with soft skin or fur, one can jab at the throat, which usually does not require much force. The same goes for humans. This is not 'clean' fighting, but it works!